At the beginning of this project, our contractor stated “We’ve never had [a kitchen remodel] go longer than 3 months.  Well, they’ve got 2 more weeks!

This week, all the crown moulding went up, seemingly all at once.  The cabinets just need “vacuum and adjust” as our contractor put it, and knobs, and they’re done!

The other kitchen progress this week is that all the door casings went up.  I spent a longer-than-expected day Saturday prepping and painting them. The window casings need to wait for the countertops (since 2 windows have stone sills), and the baseboards still need to go in, so I suspect I’ll be doing it all again next weekend.

Oh, and after much head-scratching, the range hood now vents to the outside.

We are told to expect countertops to show up at 10:30 tomorrow morning, which is very exciting news indeed. Once the counters are in and the plumbers have worked their magic, we’ll be able to use the kitchen as a kitchen, even if it’s not 100% done.

On the sunroom front, the walls are up and the roof is about 50% framed. 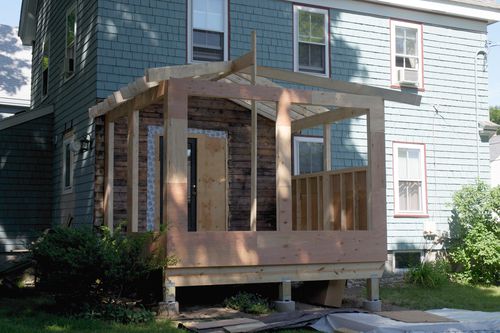 You can see the rough openings for the tall windows / doors on the side and back, and the kneewall on the front.  This kneewall is a bit higher than we had expected, but that’s fine — it will give us good privacy from the street. The pole in the middle is temporary until they get the rest of the roof framing done — the addition has a hip roof rather than a gable end.

We’re told that there’s more leadtime than expected on the sliding windows for the front wall, and that may well delay completion of the project. But we’re proceeding with plans for a kitchen-warming in mid-late July even though the sunroom portion may not be 100% done. Stay tuned for details.