Evidently the flooring contractor wasn’t happy at the prospect of installing new oak flooring directly over the old, so today they ripped up the old floor in our ex-sunroom. When it was installed, someone used a layer of newspapers between the new oak and the old pine, so we now know the year those floors were installed: 1935.  Unfortunately the newspapers are too deteriorated to save, but we did take some pictures — click each for a full-size version.  We’re paying a lot more than $199.50 for our fridge, but then again it’s much larger than 9 cubic feet. 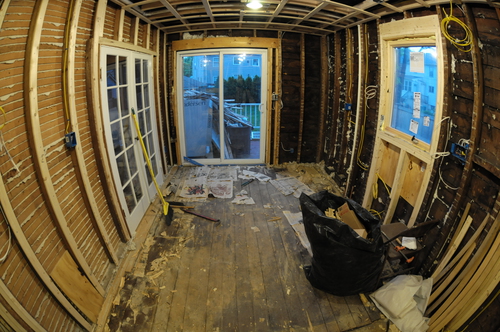 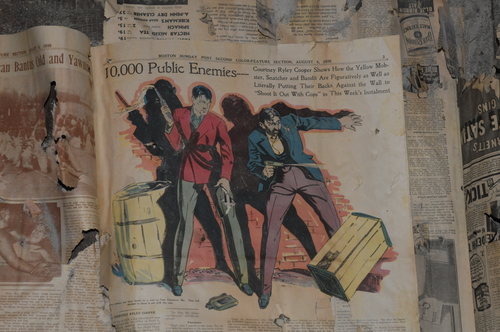 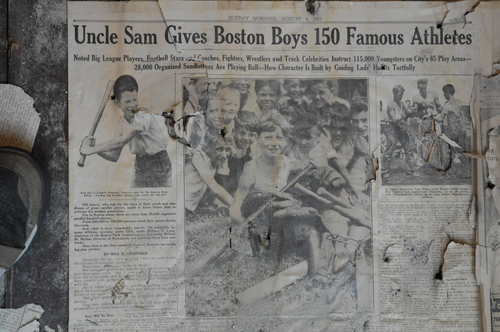 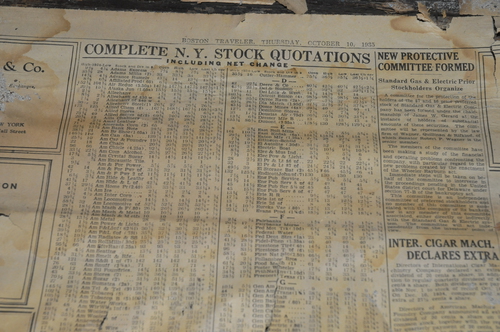 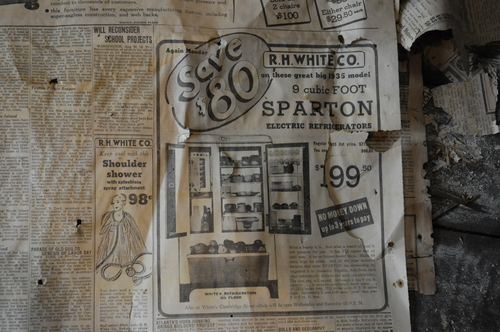 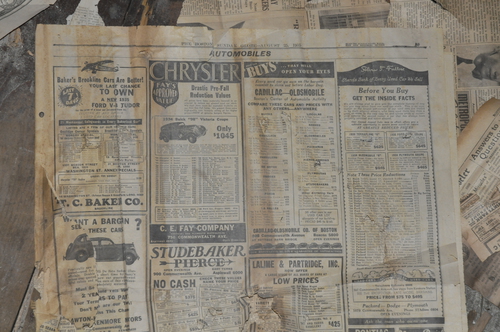 We have a new water heater! Yay! 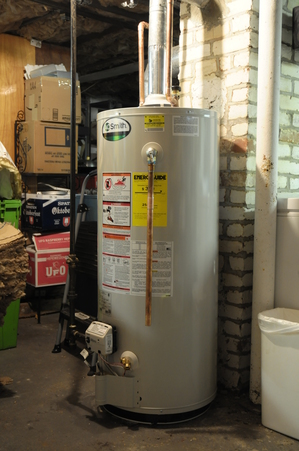 This week saw major progress on 3 fronts, and a setback on another.

The setback, of course, is that our water heater sprung a leak.  As far as I can tell, it was installed in 1996. That makes it 16 years old, which is absolutely ancient for a water heater. Considering it probably had a 10-year warranty at most, we knew when we moved in that we should expect it to die at some point. I suspect it’s the vibration and general disturbance of the remodel that pushed it over the edge. Though we’re not happy about the added expense right now, there are worse times to have to replace a water heater than when a plumber is already working in the house.  We seriously considered replacing it with a tankless, on-demand water heater. But in the end, the added expense (more than 3x the cost) and complexity (we would not have hot water again until Wednesday or Thursday) convinced us that it’s not in the cards right now.

The first area of major progress this week is that two of the three new windows have been installed.  The one on the north wall (over the main sink) is almost the same size as the old one — a couple inches taller, and mounted a couple inches higher as well.  The one on the west wall (over the prep area) is the same width as the old window there, but much shorter to fit over the counter; it’s also a casement window rather than double-hung.  And of course, these are modern windows, installed to modern standards, and will be much more energy efficeint than the old ones. The third window — where the old back door used to be — is somewhat framed in, but there’s some repair work needed due to water damage around the old door. I am optimistic that framing may be finished next week or early the following.

The second area of major progress this week is electrical rough-in. The electricians were here four days this week, and also have only a few tasks to finish up. One minor piece of progress is that the in-ceiling speakers in the kitchen are roughed in.  My excitement over this is way out of proportion to how important it is. 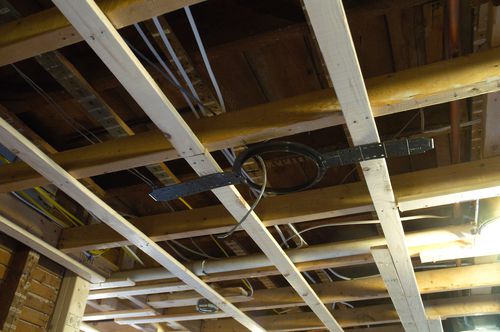 I spent a couple hours fishing “my” end of the speaker cables to the distribution point in the basement and hooking things up there, which involved taking apart & moving the Barrister bookcase in the dining room.

The third and final piece of progress this week is that we have a contract for the sunroom part of the project!!!  Work can start on that when we get a building permit and when our project manager / main carpenter has some free time.  Expected completion of the whole project is still late June / early July.

Earlier I commented how I am learning how a real electrician does things by examining their work. Here’s an example. This is a picture of the outside of the half bath. Besides putting in a new ceiling light and switch, the electrician has moved the bathroom’s light switch to inside the bathroom; this was a 10-minute job since the walls here are open. 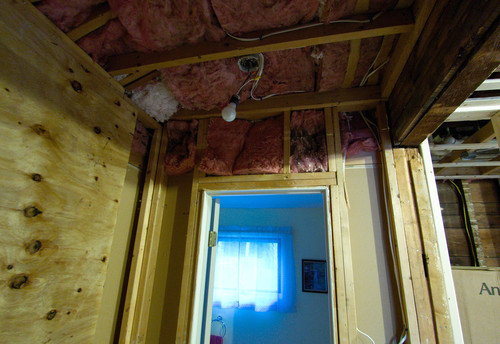 The bathroom light switch used to be on the left here, in the stud bay just to the left of the door. The light is on the left-hand wall inside the bathroom.  When they disconnected the switch, my thought was, “how are they ever going to stretch that wire to reach the new switch location?”.

As it turns out, I was just not thinking like an electrician. The new location of the overhead light in this area (with the bare bulb hanging from it) is close enough that the old wires reached. So they just ran the old wires to there, and ran new wires to the new switch. Thus, that light’s box has two unrelated circuits in it, one of which is just passing through.  It’s obvious when you think about it, but not something that an average handy homeowner would necessarily think to do.

There’s another example of this in the box for one of the recessed ceiling lights: it houses the junctions from the old ceiling fixture’s box where it provided power for the upstairs bathroom, even though the new kitchen’s lighting will be on its own circuit.

In fact, most of the counter-level boxes in the new kitchen will have 2 circuits in them: one 20A for small appliances, one 15A for lighting.  This is definitely something to keep in mind if I ever do any work in those boxes.

The plumber will install a new water heater on Monday.  After considering our options, we’re replacing it with another gas-fired tank water heater: the tankless was just too much cost, and installation would take too long, for tankless to be a viable option for us at this time.  When it is time to upgrade our heating boiler (not for many years, we hope), we’ll consider producing domestic hot water as a zone off of it.

Day three of the electrical rough-in was today.  I am no electrician, but it appears to me they’re just about done.  And we have light in the kitchen!  There are six recessed cans installed into the ceiling.  Right now these just have temporary bulbs — not the nice LED downlights we’ll have eventually — but the amount & even-ness of the light in the kitchen far surpasses what was in the old kitchen already. 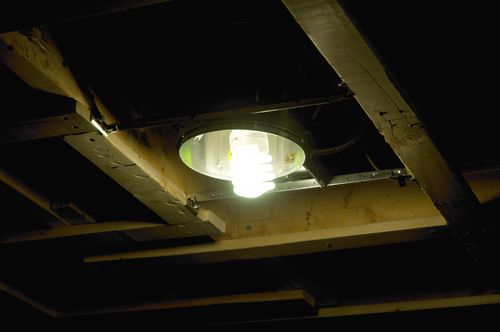 The electricians still have to wire the two outlets we asked for that are not related to the kitchen (one for the fridge in the basement and one dedicated to the window A/C in our bedroom), run the stubs for the circuits we’ll need in the addition once that part of the project gets going, and do the low-voltage wiring (speakers, ethernet, and phone).  It’s educational for me to look at their work and see how a modern electrician chooses to do things when walls are wide open.

Today marked the installation of the new window over where the prep-area counter will be. 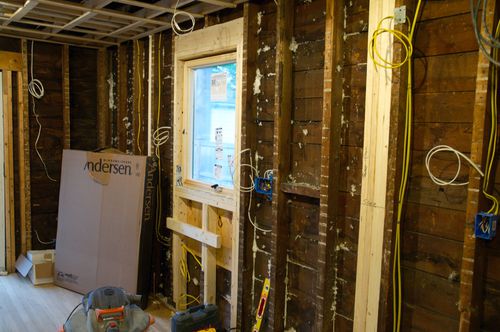 The rough opening for the other window — over the kitchen sink — is just about done too, and I suspect that window will go in tomorrow. That’s it in the Andersen box in the photo above. 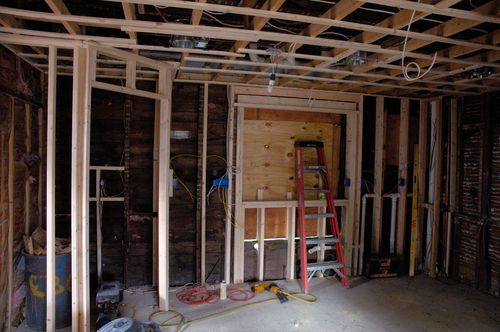 The carpentry in this area has been, in our contractor’s words, “a challenge” because of how hacked-up this wall was, and because there are two layers of cedar (clapboards then shingles) on the exterior.   This window and the one described above are casement windows, chosen because this type of window is easy to operate even over a counter.  They’ll have grilles installed into them to look like 2-over-2 windows like are in the rest of the house.

The third kitchen window — by the half bath, replacing the old back door — is in house as well. This one is tall and skinny, and will not open.  But it will let much-needed light into this area. I’m not sure when that will go in since that’s a convenient door for the contractors to use.

We lost our water heater today. We suspect it is at least 15 years old, so it doesn’t owe us anything really.  And I suppose it’s convenient that we are already working with a plumber & electrician.  Unless the cost is prohibitive, we will also take the opportunity to upgrade to a tankless water heater that should save us significantly on our energy bills.

But still.  This is not the kind of excitement (or cost) we need right now.

Well, Week 3 of this project was frustrating.

We knew that our general contractor would be on vacation out of town this week.  But he had lined up plumbing and electrical rough-ins to take place in his absence, so while we weren’t expecting much to happen, at least that would be done.

The plumbing rough-in was maybe 60% done a week ago Friday, as I posted.  And they did come back and almost finish this week — there are stubs for the two under-cabinet kickspace heaters in place now. But as far as I can tell, the rough-in for the 2 traditional baseboard heaters isn’t done.  I don’t know.  It’s possible that can’t happen until the finish floor is in, or there’s no real rough-in to be done because the heating pipe is already in the right spot.  Or it could be that due to lack of direction they just didn’t want to do the wrong thing.

The electrical rough-in was supposed to happen this week too.  But the electrician showed up and noted that the framing to lower the ceiling in the old-sunroom part of the kitchen is not in place yet, and this is where he needs to run a good portion of his wiring. There are things he could have done, but he wants to do the whole thing in one shot, which is understandable.  So he left to do another job and will return at a future date when the framing’s actually done.

We do finally have the completed plans and price for the 3-season room portion, which we need to review and get back to them on today. And we ordered & received the pendant lights (well, 1 is still in transit). But in all, as far as material progress toward completion, it’s as if this week didn’t exist.

We’re doing a simple, traditional 4″ backsplash of the same quartz as our counters for most of the kitchen, with a fancier hearth-like backsplash behind the stove.  This approach, besides being cheaper, gives us greater color flexibility over the years because paint between the upper and lower cabinets is a lot easier to change than tile.

I met with the designer at our countertop supplier today (who will be doing the backsplash as well) and came up with a design for what want to use behind the stove.  Here’s the mosaic tile for the field: 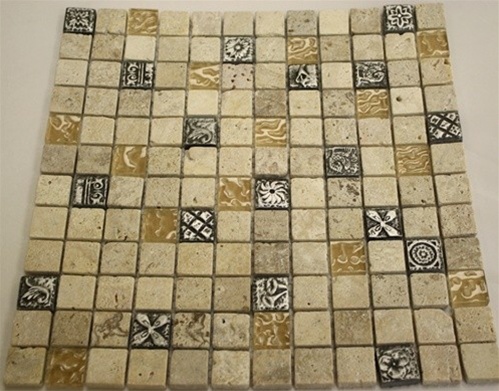 And here’s my crappy rendering of what the whole thing will look like. 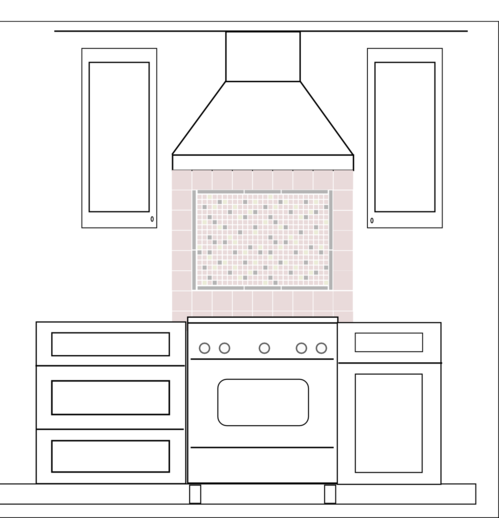