Slop sink was installed in the basement today… and the kitchen sink & dishwasher disconnected, which we weren’t expecting, but whatever. 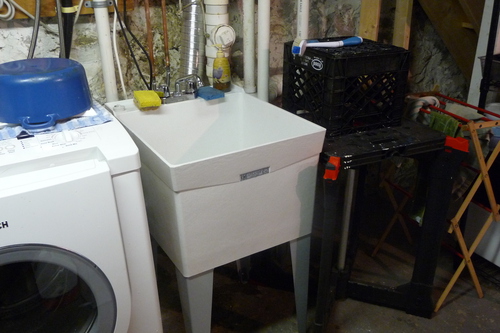 The sunroom and dining room are empty; most of our first-floor furniture is in the living room.  The plumber comes tomorrow to install a slop sink in the basement. The old kitchen is nearly empty, but the temporary kitchen in the basement won’t be truly functional for a few days yet.  Demolition begins on Monday. 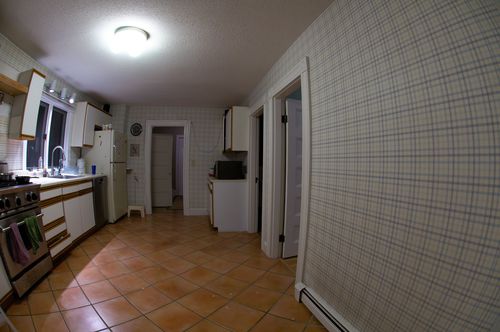 I’m excited to see it all go, and curious and a little nervous about what we’ll find when they open up the walls.

I took the task today to pack up most of the kitchen and dining room.  We are probably 95% done at this point, excluding furniture.  It’s a big help that our stuff is not going into a moving van, so the fragile items need to be carefully packed but not bomb-proof.  And certain things I unpacked onto shelves rather than leave them in boxes or crates.

I was even able to re-install our venerable oak shelves (originally from the mudroom in Southboro) by hanging them from the floor joists. This is over the spot where we’re intending to relocate one small section of the existing kitchen’s lower cabinets & countertop.  I think these will be very helpful. 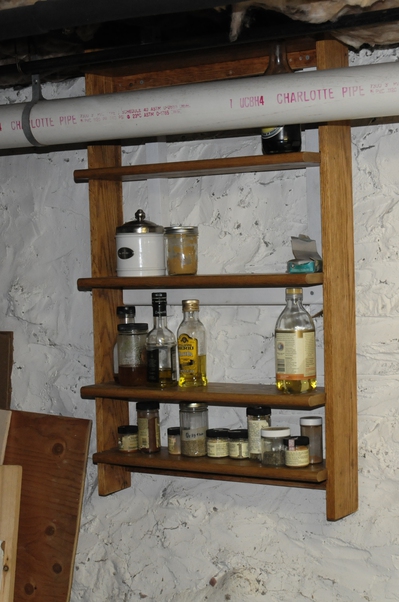 We have a firm start date. Site preparation and light demolition will commence on April 2, with the bulk of the demolition occurring later that week.  Our contractor dropped off the building permit yesterday.  The plumber will install a new slop sink in the basement (temporary kitchen) sometime before this.  So we need to be moved out of the kitchen, sunroom, and dining room in a week and a half.  They’ll move the fridge (empty) and one old base cabinet (also empty) to the basement on the first day of heavy demolition, so the temporary kitchen won’t really be operational until then.

I did buy an induction hotplate for use in the temporary kitchen. Like the slop sink and spare fridge in the basement, I think we will get good use out of this even after the kitchen project is over.

Packing up is going fine, though Lis is less convinced than I am that we’re on track.  I intend to make a major dent in it on Saturday.  We cleaned up & reorganized the basement a couple weekends ago, but so far we’ve been selective in what we move downstairs.  That ends this weekend.  My plan is to move everything downstairs — with the stuff I anticipate needing kept handy — and move just those items temporarily back up into the real kitchen until we’re ready to get underway.

On the 3-season room front, we are closing in on a design.  I met with the architect yesterday but there are a few dimensional problems with his sketches (which were based on measurements off a photo, not site measurements).  The price is going to wind up being higher than we had hoped. The excess cost appears to be in the bare fact of putting on an addition, so tweaks to materials and configurations are not going to make a major difference; saving nickels and dimes on features and materials is just going to make us less happy with the end result.

Our contractor says, “We are planning to start work at your house on the week of April 2nd. We have already acquired the building permit and are lining up the subs.” 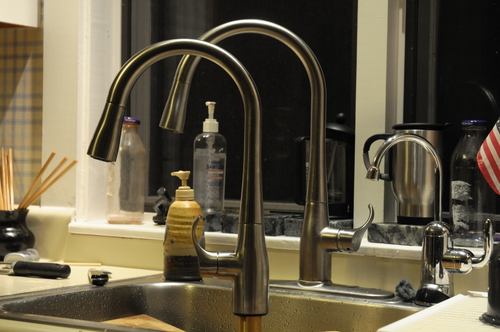 It is the Time of Ordering.

Last week I ordered (and already received!) the “island” backguard for the range. This part is shorter than the backguard on there now, and will allow us to do a nicer decorative backsplash behind the range.

Yesterday I ordered the prep-sink faucet and soap dispenser (we’re reusing the current faucet for the main sink) and an induction hotplate for the temporary kitchen.

We’re waiting for the sunroom design to be finalized before we can make final selections on ceiling/wall speakers and ceiling fan, and it’s not time to order fridge, microwave, or range hood yet.

We will also need a few pieces of furniture when we’re done (at least bar stools and a new kitchen table & chairs), but we really need to see the finished space before we even think about those.

We received the land survey in the mail yesterday.  By my measurement, the existing deck is 16 feet from the rear property line.  Which means no matter what we do with the new sunroom, we’re guaranteed to be compliant with the setback requirement. Yay!

That also means our new fence is within a couple inches of the actual property line. Double yay!  Also: mystery of the stone marker in the middle of our driveway, solved: it serves to establish the line of the front of our property.

Finally: we gave our contractor a key today. Start date can’t be far off!