We met with the architect from our contractor today concerning the 3-season room addition. I think we made a great deal of progress; he said as we were wrapping up that we’re pretty close to a full spec now.

The previous tentative design had included the use of wooden screen/storm doors as wall panels.  We had some concerns about this design largely surrounding ease of switchover between glass & screen panels.  The architect had an alternate proposal for us today that uses sliding patio doors rather than panels, for about the same cost. We think this will work great.

We had some discussions concerning hip roof vs. gable end, skylight or no, whether the front wall (facing the road) will have a kneewall, floor height with respect to the main house, etc. He is going to price out the various options, and we’ll make a decision.

Also on the porch front, some surveyor markings magically appeared on our sidewalk yesterday — including a mysterious flag marked “stone bound” set into a dug-up area near the property corner — so I suspect we will see the land surveyor’s output relatively soon and we’ll see where we stand with respect to setback issues.

Our contractor thought we might possibly need a zoning variance because the existing house’s location is non-conforming (grandfathered).  Lis went to the city’s building department and was told we definitely did not need a variance, but might need a special permit.

Last week we had an appointment with the city’s Development Review Board, and the good news is that they’re of the opinion that we don’t even need a special permit.  There are two parts of the building code that may be applicable to us: the first is basically that if we put on an addition that is itself compliant with the setback rules, we are OK.  The rule in question for this project is the rear setback, which for our property is 15 feet. I believe the sunroom we’re designing is more than 15 feet from the rear property line, but we need a land surveyor to verify exactly where the property line is. If this is the case, our addition would be by-right and we would simply need a normal building permit.

The other possibility is that part of the sunroom would be closer to the rear property line than allowed by setback. There’s an interesting ruling by our city’s Board of Aldermen that, in certain densely developed areas where most structures are already non-conforming, small additions that basically don’t make the non-conformity worse in the rear or side setbacks are to be allowed.  Our neighborhood is one such area.  So even in the case where the proposed sunroom would violate the rear setback, so long as we don’t also violate the front setback our addition would, once again, be by-right.

As I mentioned, what we need to figure out which of these situations applies is an accurate land survey of our property.  Lis has been attempting to hire a land surveyor to do this for us; I wouldn’t think this should be hard, but so far no luck getting anyone to actually come and do the work.

The other possible zoning issue is Floor Area Ratio, which is a surprisingly
non-straightforward calculation that limits the amount of living space
in relation to lot size.  My calculations — assuming I did them
correctly — show that we’re not close to FAR being an issue.

We also inquired about any setback restrictions concerning patios, since
we’re very likely to want to construct a patio behind the house in
future (though not directly as part of this project).  There are no
property-line restrictions so long as it’s just a flat patio (no
structure), though there are restrictions on the lot’s percentage of
impermeable area.  I think we’d want to do a concrete paver patio anyway
— which, if selected and installed properly, is considered permeable
— so we should be good there too.

On the design front, our contractor has now told us that a flat roof vs. a gable-end roof is approximately the same cost — the flat roof is simpler to construct, but needs to be stronger for snow load and the required rubber roof is more expensive; whereas with a pitched roof there is more roof area, but we can use standard asphalt shingles.  So given this, we’re likely to proceed with a pitched roof to better match the architecture of the house.

I would like to consider doing some simple gingerbread ornamentation of some sort to help tie the sunroom into the rest of the house.  Using some of the same pieces as we used on the front porch — which were quite reasonable in price — seems like it should work just fine.  We just need to work with the contractor’s architect to come up with a design that works.

As I posted yesterday, we’ve ordered our kitchen cabinets.  So that means the layout is finalized now.  Here is the plan view: 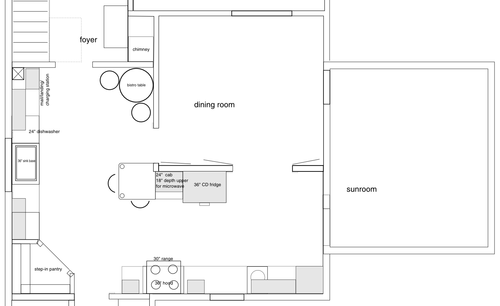 and here are the elevations:

This is not a huge divergence from the “GardenWeb” plan, but let me take you through it once more. Where we keep stuff is, of course, subject to change once we’re living with the space, but having a plan makes me feel better that we haven’t forgotten anything.  Starting at the lower right of the plan view and left hand side of the topmost elevation (stove wall):

Finally, the fridge wall.  Once again, starting from the left:

The planning for our new sunroom is much less far along.  What I’ve drawn here is the proposed size, but Lis and I need to secure a special permit from the city before proceeding since the existing house is non-conforming to current zoning.

END_OF_DOCUMENT_TOKEN_TO_BE_REPLACED

I guess we’re really doing this!  We ordered the kitchen cabinets yesterday. We may be a little on the early side to order — we told them we’d like delivery in mid-May — but the current incentives at Lowes were too good to pass up.  As Gina points out, our design has a good amount of flexibility in exact placement since the fridge and stove walls are open-ended, and the sink wall has the to-be-built pantry on one side. So if some dimension winds up being not quite what it is today, it will still come out all right.

Those who follow my Project 365 will have seen the following two pictures. The first is the sample door, countertop, and drawer pull that we’ve chosen. The door is cherry with a pecan stain, and the countertop is Giallo Nova Silestone.  The cabinets are finalized now, since we’ve ordered them, and we’re really quite happy with the countertop and so we’re very likely to stick with that choice.  We like the pull quite a bit, but haven’t found a knob that goes well with it yet so it’s not the final choice quite yet. 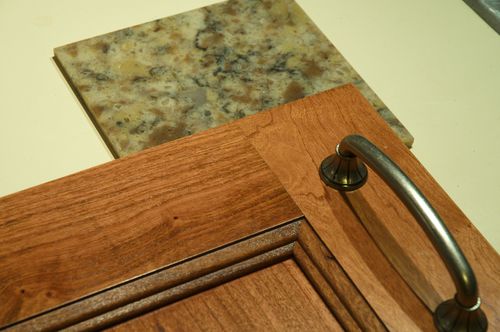 Today’s second photo is Lis holding the five-foot-long receipt from the cabinets. 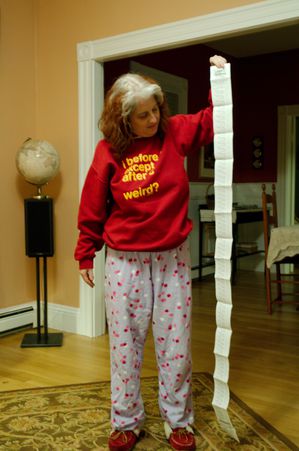