We loved our 3-season porch at our old house: 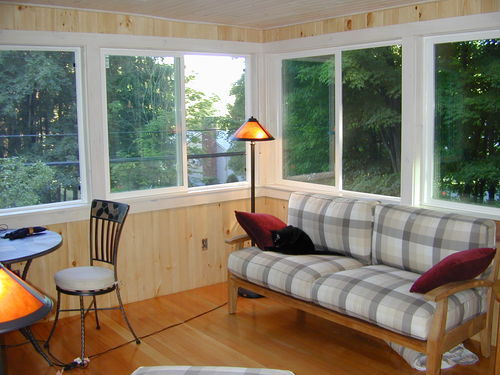 We tended to spend a lot of time out there during the warm months.  We would like to re-create a space like this for the new house.

We recognize that the sunroom’s style will have to be adapted to the new house and neighborhood, but we still feel that a lot of the same character — lots of wood, lots of openable windows while stil maintaining some privacy — can carry over just fine.

The current plan is as follows: remove the current deck, and replace it with a 3-season sunroom that’s octagonal, roughly 16 x 13 feet, with the long edge along the house. Bias the sunroom forward by about 3 feet from the corner of the house to allow for more patio space between the house & back fence.  The primary door to the patio would be off the corner of the sunroom, next to the house.

I think we will want straight-grain fir floors (just like the old house), with a tongue & groove wood ceiling following the pitched roof, and tongue & groove walls (where there’s not window). We will want to strip the shingles off the portion of the house wall that winds up inside the sunroom since they’re quite worn. The street-facing windows may want to be higher, or at least have curtains, for privacy.

Since we use the current deck frequently, we’ll want to replace it with a patio in the space behind the house & sunroom.  This is the most private area of the property, and with proper hardscape design I think it can be quite attractive and functional, without crowding the lawn area too much.