Thursday was our first full day at our lodge near Arenal Volcano.  The lodge there was originally built as a research station for the Smithsonian, but is now a quite nice hotel; in fact it’s the hotel that is the nearest to the volcano itself.

The weather at Arenal was… disappointing.  Having crossed the continental divide once again, we were technically on the Caribbean side of Costa Rica.  Arenal is part of the first mountain range that Caribbean winds encounter. This means we saw at least some rain every day, and the weather was just generally cool and damp.  Our room was neither heated nor air conditioned, and so whatever it is about humidity that this netbook dislikes kicked in again and we were unable to post.  I’m not sure we would have had time anyway; we had quite a busy schedule.

We took a morning trip to the Hanging Bridges, a private conservation area with pedestrian suspension bridges through the rainforest canopy. We saw some good wildlife here — including two eyelash vipers (sleeping, thankfully) — and some good scenic views from the bridges.  The amount of people there, though, limited what we were able to see, and also made the bridges quite shaky from peoples’ footfalls.  I’ll have some great shots from here once I’m able to process them, I’m sure, but we would have had a better time if the place required (and limited) reservations for groups like ours.

We went back to the lodge for lunch, then out to the local national park in the area of the lava flow from Arenal’s 1968 eruption.  “Arenal” means sandy, and indeed its lava flows are not molten, liquid rock but more granular or pasty in structure, composed of large boulders that tumble down as well as the area’s characteristic coarse black sand.  We managed to make it the two miles in to the lava field in the dry, but the hike back was mostly in moderate rain — nothing like our trial by liquid on our first day at Savegre, but enough to make everything damp even through rain gear.

We then proceeded directly to a hot spring for a dip followed by dinner. The road to the lodge is not in very good shape and heading back just to turn right around again would have taken too much time.  I have to admit I was skeptical about splashing around in a hot spring in the tropics, but given we had just come off a wet hike it was quite pleasant.

Today’s picture is from none of these activities.  My photos taken in overcast conditions, outright rain, or the darkness of under the rainforest canopy will require more processing than I’m able to do in the field, so instead we have one of my favorite birds from the trip — the Great Kiskadee — on a feeder platform at the lodge.  These birds are very handsome, and are seen everywhere we have been. 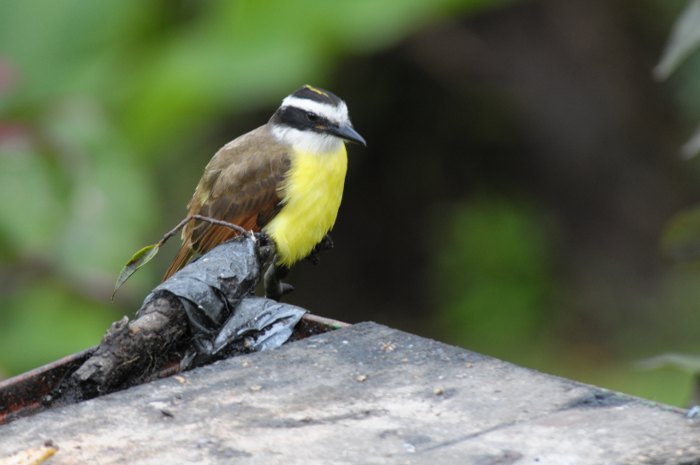