On New Years Eve, the group had no scheduled activities at all.  This Free Day was a welcome opportunity to do some exploration on our own, and to do some suggested optional activities — we could choose from horseback riding, white-water rafting, caving, or as Lis has written about already, ziplining.  There were 7 of our group who went ziplining; everyone else did activities near the lodge.

Lis’s words here largely mimic my own thoughts on the subject.  I’ll only add that it seems somewhat incongruous as an ecotourism activity — my feeling is it’s much more about the adrenaline and sense of accomplishment than it is about enjoying the scenery or being outdoors.  Perhaps with practice it would become less about the activity and more about the surroundings, but it’s never going to be a soothing experience.

After zipping back to the lodge and having lunch, Lis took an adrenaline-crash-fueled nap and a few of us went for a short hike to see a large column of army ants.  As with the previous day, photographic conditions were challenging enough that my shots of this (the ants, not the nap) will require processing before posting.

The evening festivities began with dinner — the same buffet we’d had the first night, but with some more celebratory additions including a delicious pork roulade stuffed with vegetables.  The hall had been dressed up with streamers and balloons.  There was karaoke to be had (though nobody — none of our group nor the other guests — took it up).  There was a strange mix of American and Costa Rican music, including a guy who played guitar for a while.  At about 9:30, the waiter came around handing out sparklers and giving word that the promised “weather permitting” fireworks were on.  A “few minutes” (45, but who’s counting) later, we went outside for a really quite nice show.  There’s something to be said for a small fireworks display that you can be close to — you get a much better sense of three-dimensionality.  Soon after, the rain came back; the 4 of us who had stayed up until this point gave up and went to bed.

Today’s shot is once again at the lodge’s fruit feeder.  This is a Coati, a member of the raccoon family. 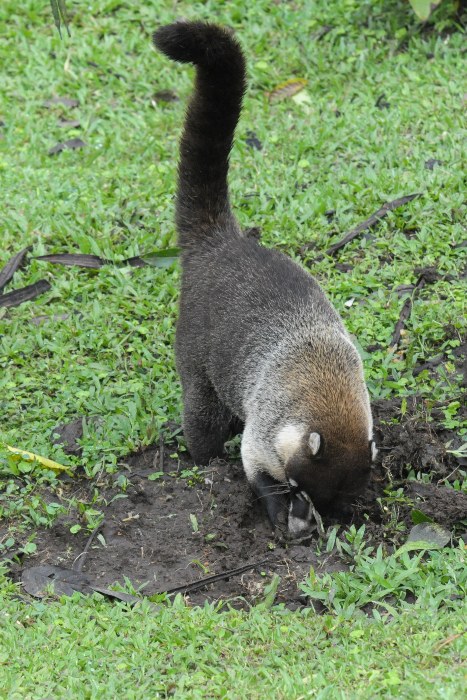